You can download the script and run it, this script will export the EFS Security Certificate to your “My Document” or “Document Folder”.

I did not write this script, i have found it somewhere on the internet and lost is original source, and i also tweaked this script according to my need.

Windows Encryption is one of the best inbuilt security tool in windows7. My and my friends use windows encrypted file systems (EFS) a lot and may be you are using EFS in your windows environment.

Rather that create a whole DISK, My Documents, Desktop encrypted, I always prefer to create an encrypted folder somewhere on the disk and then put the files which you want to be encrypted in that encrypted folder.

I have written a small Powershell Script which created a encryption enabled folder on your desktop with folder name “Encrypted-Folder”.

You can download the script from this link : http://gallery.technet.microsoft.com/scriptcenter/Create-Encrypted-Folder-6f0fe0c9

Script Logic
I have created a small flow charts on how this script works. 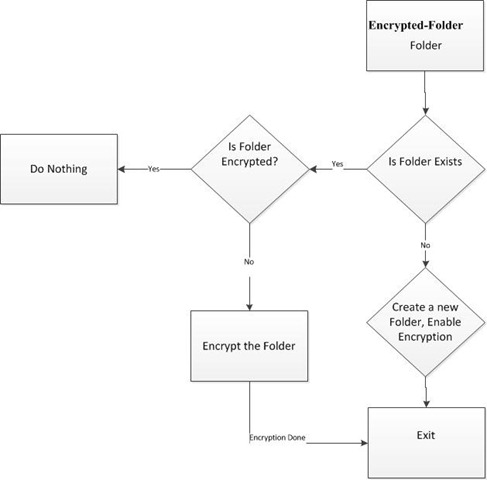 How it works.
In this script i am using “cipher /e” to enable encryption. I have tested this script on windows7 and windows8 and it is working fine for me.
Screenshots.

You can download the script from this link : http://gallery.technet.microsoft.com/scriptcenter/Create-Encrypted-Folder-6f0fe0c9

That’s all for now.